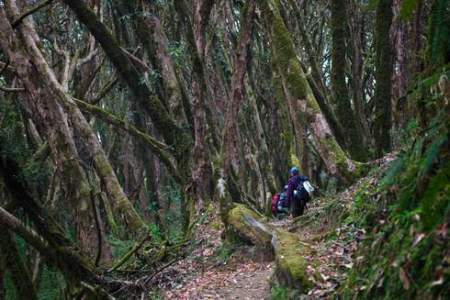 Forests are considered as the important resources of the poor people. Nepal a small mountainous country experienced various model of forestry governance ranges from strict conservation to community based conservation. In the course of that various policy and institutional mechanism were set up for translating the policy into practice.

People started to feel that their forests were insecure which resulted massive deforestation. This process continues and environmental crises started to be seen in Nepal due to deforestation. Nepal government tried to protect its forest resources by investing huge resources of the country. Armed forest guards were employed to patrol the forest area to prevent illegal tree felling. But these all practices became unfruitful to conserve the forest of Nepal due to exclusion of people in forest conservation.

During 1970’s idea of involving local people in the forest management has been evolved indigenously. National forestry plan, 1976 felt the need of local people in the forest management. In 1978, Panchayat forest rules and regulations were promulgated to manage local forests by the local political body. In 1989, government developed the Master Plan for Forestry Sector, which legalize the practice of community forestry at national level. Then Forest Act, 1993 and Forest Regulation, 1995 formally establish the legal base for handing over community forestry. Now there are five models of community based forest management in Nepal viz community forest, Leasehold forest, collaborative forest, religious forest, protected forest.

The community forestry is credited for improving the ecological condition of forests, which in turn resulted in the conservation of biodiversity as well as soil and water, especially in the mid-hills. Community based forest user groups are also carrying out community development and poverty alleviation activities. Involving people in forestry governance has been very effective in forest conservation so Nepali people cannot even imagine about the management of forest by state only without involving people.

The content, structure and grammar is at the discretion of the author only.

This post is published as entry #45 of our #Forests2015 blog competition. It is submitted in the “Youth” category.

The first selection of the winners will be based on the number of comments, likes and views each entry gets.

As a reader, you can support this speaker’s entry:

Have a look at the other blog competition entries too!

11 thoughts on “Changing Paradigm in Forestry Governance in Nepal”

This blog is managed by the social reporters from the XiV World Forestry Congress. Our social reporting channels are not vetted as official communications by the Government of the Republic of South Africa, FAO or any of the Congress partners. The blogposts represent the opinion of the individual authors.
→ Join our social media team! → Submit a blogpost!